Illuminati Satanic Ceremony done days before Halloween is no mistake

How crazy do you have to Bey?

While Beyoncé was performing her song “Haunted” during Jay Z’s Tidal X benefit concert, her long braid apparently caught on one of her earrings and ripped it from her ear, leaving her bleeding and her ever-loyal Beyhive filled with worry.

Fans of the superstar swarmed Twitter to give their queen a shout-out for continuing on with her performance, but their show of support quickly turned graphic.

In the hours after the “Lemonade” performer’s injury the hashtags #CutForBeyonce and #BleedforBeyonce began surfacing on social media with members of the Hive allegedly cutting themselves in solidarity.

While many of the images paired with the hashtags are the stuff of memes and trolls, others were seemingly more graphic. Either way, fans should listen to their Queen Bey when she says “Don’t hurt yourself.”

Moment in what Beyoncé realized that her ear was bleeding.#TIDALX1015

“If the queen bleeds the hive must unify and leak our blood to restore her spirits,” one super fan tweeted. “Beyhive we must.”

Another wrote: “If Queen B had to endure pain, so do I. Tonight we #CutforBeyonce.” 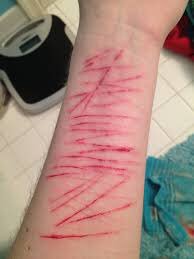 Only a real fan would defend their queen like this

As the hashtags began to trend other social media users began to call out Beyoncé fans for their questionable Formation.

“As a person who self injured for years,” one tweeter wrote, “Please don’t #CutforBeyonce or #BleedforBeyonce. Self injury and cutting is not a joke.”

If the queen bleeds the hive must unify and leak our blood to restore her spirits. Beyhive we must #CutForBeyonce

One fan even sent out self-help information for those struggling with self-harm.

And this isn’t even the first time the hashtags have surfaced on social media, according to Yahoo! It has popped up several times, particularly when fans felt their Queen unfairly lost out on an award. The first #BleedforBeyonce appeared in 2013 and #CutforBeyonce made its way to social media a year later.

Help Support us with a $5.00 donation

‘THEY NEED IT NOW’ Stimulus check update – Biden ‘acting fast’ to get $1,400 checks to Americans and promises they WON’T be cut down

Listen Very Carefully: Biden Admits That He Doesn’t Even Know What He Is Signing

CONFIRMED! VOTES SWITCHED FROM TRUMP TO HILLARY IN TEXAS

Anita Martir Rivera - October 25, 2016
0
"She voted straight Republican and the vote had changed to Clinton!"Residents of at least two cities in Texas are complaining that they voted for...

Are You Ready? US May Launch Preemptive Strike On North Korea...

There’s an alliance growing between Saudi Arabia and Israel — and...

DEATH IN THE WATER Tragedy as child’s body is among six...