Syrian President Bashar al-Assad is a close ally of Russia, so all eyes are turning to the Russian government in the wake of Donald Trump’s missile attack on a Syrian airfield, and tensions are flaring between the two super powers. A few minutes before the bombing, a top Russian official warned the Americans of “negative consequences” if Trump bombed Syria – and evoked Iraq.

Furthermore, the Russian site RT reported after the missile attack that Viktor Ozerov, chair of the Russian Senate security and defense committee, called the American bombing “an act of aggression against a UN member.” The site reported that Ozerov “added that Moscow would call an emergency UN Security Council meeting to discuss the situation.”

“First of all, Russia will require an urgent convocation of the UN Security Council, which can be viewed as an act of US aggression against the UN state,” Ozerov said, according to RIA Novosti, a Russian publication.

The intensity of the Russian response raises concerns about whether the Syrian action could ignite a chain of events that escalates conflict between the U.S. and Russia (with some on Twitter even evoking the term “World War 3,”) at a time when Trump has been under fire for alleged links to the Russian regime.

In a strongly worded statement of his own, U.S. Secretary of State Rex Tillerson accused Russia of being either “complicit” or “incompetent” in stopping Syrian chemical weapons, as the rhetoric between the Trump administration and Russia heated up. You can read Tillerson’s full statement here: 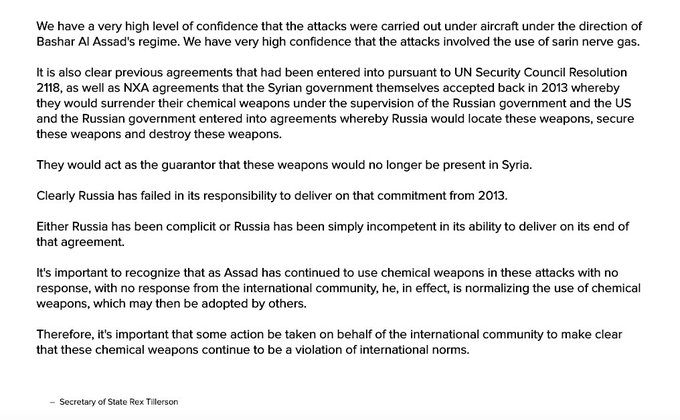 Trump ordered the launching of 59 American cruise missiles on April 6, targeting the airfield that he says Syria used to stage a chemical weapons attack that killed men, women, and children.

Russian President Vladimir Putin spoke of Syria several hours before the Trump attack, supporting Syrian President Assad, and the Russian official who warned of “negative consequences” to America a few minutes before the bombing compared the situation to Libya as well as Iraq.

Russian #UN ambassador warns the US that there could be “negative consequences” if Washington takes military action against Syria. #Syria

According to ABC, “Vladimir Safronkov, Russia’s deputy representative to the United Nations told reporters in New York that Russia was receiving signals of an attack being prepared and warned that people were not asking about possible consequences.”

Reuters reports that Safronkov warned of “‘negative consequences’ if the United States carries out military strikes on Syria over a deadly toxic gas attack.” 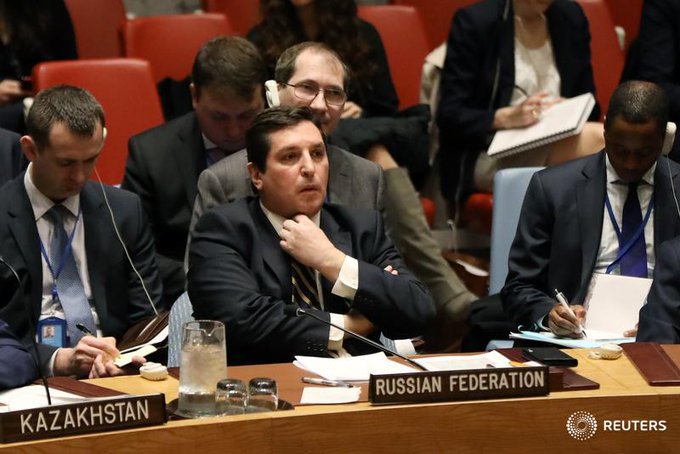 Anita Martir Rivera - October 8, 2019
0
The largest asteroid from the group is bigger than the Great Pyramid of Giza in Egypt. According to the agency’s Centre for Near-Earth Object Studies (CNEOS), Earth...

Church of Satan Pleased as Christian Bale Thanks ‘Satan’ for Inspiring...

Police ask public to stop calling 911 over lack of toilet...