Sometimes I think all the hand-wringing about some sort of online “war on conservatives” is silly. Sure, dude, maybe nobody is paying attention to your brilliant tweets because you’ve been shadowbanned. Perhaps Twitter’s “Trust & Safety Council” really is keeping you from reaching the audience you deserve. Or maybe you’re just boring and kind of dumb? I tend to be skeptical of these complaints, but it’s possible that there really is an ongoing conspiracy to silence half the country. I have to admit, it would explain why I keep getting suspended from Twitter for no good reason. Maybe Twitter really is out to get conservatives, even us RINO cuck #NeverTrump traitors who probably love Hillary. 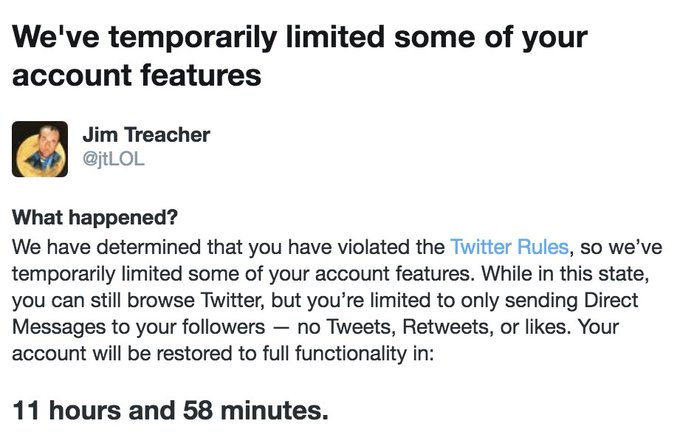 And here we go again…

Then it was restored, with the following in lieu of an explanation:

What rule did I break? I have no idea, and apparently they’re not going to tell me. How do I avoid breaking that rule again? Beats me. It’s tough to avoid repeating the infraction if I don’t know what it was. (Good lookin’ out, Franz Kafka.)

Several other non-liberals I know also got a 12-hour lockout at the exact same time. Why? They don’t know either.

At least this time, I only got locked out of my account. A few weeks ago I was suspended outright, based on false reports by alt-right trolls. My account was then reinstated, and this is the closest I got to an explanation:

And this is just the latest incident. Last year I got suspended for using the wrong emojis to describe leftist darling Bradley Manning:

That was dumb, but at least I knew my “crime.”

Twitter can make up any rules it wants and enforce those rules any way it wants. And its users can point out when stuff like this happens to them for no given reason.

In the meantime, the effort to erase Alex Jones from the Internet continues. I do not like Jones, which is why I only pay attention to him when people are telling me why I shouldn’t pay attention to him. Lately that effort has been driven by CNN’s Oliver Darcy:

Twitter said Friday that the accounts belonging to far-right conspiracy theorist Alex Jones and his fringe media organization InfoWars would, for now, remain online, one day after a CNN investigation found that Jones’ Twitter accounts appeared to have repeatedly violated the company’s rules.

That’s right: CNN is “investigating” tweets by a guy they don’t like because Twitter hasn’t given into the outrage mob and banned him yet. It’s not enough that Twitter gives you the tools to block any other user, or mute them, or even mute entire conversations and/or certain words. That’s insufficient. Nobody else should be able to see the stuff that you don’t like.

State of emergency declared, 10,000 ordered to evacuate in Michigan after dams burst

More than 5 million Americans to be infected with coronavirus and 290,000 will die...

Healthcare Evangelist Anita Fuentes - May 20, 2020
0
This is viewer supported news. Please do your part today.
Like Us on Facebook!

Evangelist Anita Fuentes - August 9, 2019
0
In a table-top pandemic exercise at Johns Hopkins University last year, a pathogen based on the emerging Nipah virus was released by fictional extremists, killing 150...

We Just Witnessed 3 Major Developments That Could Easily Lead To...

NASA scientists detect parallel universe ‘next to ours’ where time runs...