An intense windstorm in Australia over the weekend left parts of one suburb outside of Melbourne buried under an overabundance of tumbleweed. The freak weather event had residents, some of whom have lived in the area for 15 years, in stunned amazement at the sheer volume of tumbleweed that blew in, some of which was piled waist-deep.

Throughout the Australian state of Victoria, where Melbourne is located on the country’s southeastern coast, severe weather led to more than 200 calls from residents to the State Emergency Service within a span of only seven hours.

More than 160 of those calls were reporting downed trees and 23 for damaged buildings, according to local media reports. An urgent thunderstorm asthma warning was even issued, and Ambulance Victoria reported an increase in calls from people struggling to breathe as a dust storm washed through the area.

The weather in one suburb of the city, however, led to an event much more unusual on Saturday, according to Reuters.

The strong winds whipped through the Melbourne suburb of Hillside and brought with it what AccuWeather Broadcast Meteorologist Adam Del Rosso described as a “freakish” amount of tumbleweed. 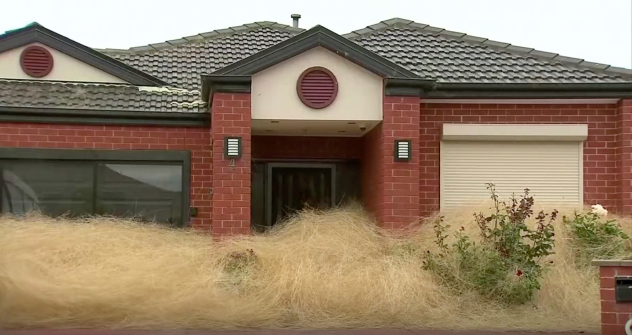 Some residents were unable to enter and exit their homes through the front door after tumbleweeds from a freak windstorm blocked off entrances and took over their neighborhoods. (Photo/7News Australia)

“It’s created this grass storm,” Margaret Prosaic, a Hillside resident, said. “And it’s just completely taken over our back yard, our front yard — as you can see.”

The winds ripped through the suburb late in the morning, bringing the massive tumbleweeds with them. By the evening, the winds continued to pick up, depositing tumbleweed everywhere.

“Not in the 15 years we’ve been here, we’ve never seen this sort of thing happen,” Naomi Gauci, a resident of Hillside, told 7News Australia.

The grass, which is known as “hairy panic” or “witch grass,” blew in seemingly out of nowhere, according to residents. Local reports say the tumbleweeds may have blown in from a horse paddock located nearby.

The witch grass covered streets, yards and a pool and even piled up in front of people’s front doors, preventing them from using the entryways. One man was seen trying to clean up the mass amounts of tumbleweed from his property, which appeared to be an exercise in futility given that the garbage can he was using was completely overflowing with the brown grass.

Madelyn Gauci was playing on the trampoline in her yard when the windstorm blew the gigantic tumbleweeds in, saying it was a “crazy” experience. Vanessa Gauci said despite the grass being “super itchy,” she enjoyed the surprise brought in from the winds because she was able to play in it.

Another resident of the suburb, Zoe Marchione, told 7News Australia that forecasters warned of winds that would reach 68 mph (110 km/h). The station reported that winds reached 48 mph (78 km/h), the strength of a tropical storm.

Marchione’s home was inundated with a huge pileup of tumbleweed in comparison to some of her neighbors, to the point where she was unable to enter or exit the home from her front door.

“Our garden is normally immaculately presented, not today though,” Marchione said. “Out of the whole street, our house has copped it quite bad.”

Many Christian Prophets who ‘prophesied” a 2nd term now say Trump is coming again not in 2024 but in 2021.

Back to school – Students are met with humiliating and confining ‘Covid-19 enclosures’ to...

Fauci: Vaccinated people shouldn’t dine indoors or go to the theater ‘for the safety...

Artificial Intelligence Gone Wild Anita Martir Rivera - February 23, 2021
0
This is viewer supported news. Please do your part today.
Like Us on Facebook!

Teen Accepted to Stanford After Writing #BlackLivesMatter 100 Times on Application

Back to school – Students are met with humiliating and confining...

Back to school – Students are met with humiliating and confining...