A surprise solar flare has burst from an area of dense magnetism on the sun’s surface, causing a temporary radio blackout in parts of Australia and all of New Zealand. 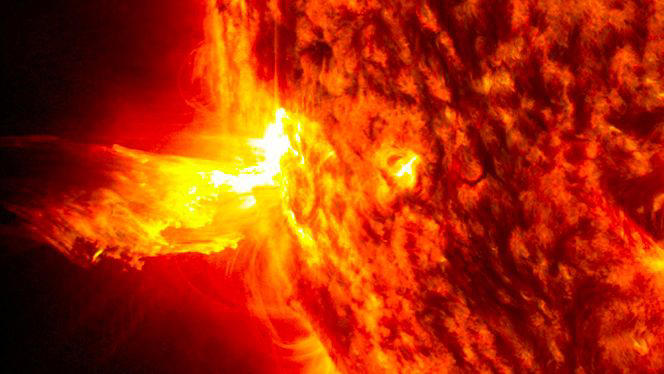 The M5-class, medium-strength solar flare was recorded by NASA’s Solar Dynamics Observatory as it erupted from the sunspot AR3141 at 7:11 p.m. ET on Sunday (Nov. 6). The flare created a rush of radiation that ionized Earth’s atmosphere, according to spaceweather.com.

Sunspots are dark regions on the sun’s surface where powerful magnetic fields, created by the flow of electrical charges, knot into kinks before suddenly snapping. The resulting release of energy launches bursts of radiation called solar flares and explosive jets of solar material called coronal mass ejections (CMEs). A CME did accompany this flare, but it was not aimed at Earth.

The solar flare erupted unexpectedly and took scientists by surprise.  “Our apologies there was no alert for this event. The flare was impulsive,” the solar activity tracking website SpaceWeatherLive wrote on Twitter.

Once they reach Earth, X-rays and ultraviolet radiation produced by solar flares ionize atoms in our upper atmosphere, making it impossible to bounce high-frequency radio waves from them and creating a radio blackout. Radio blackouts occur over the areas lit by the sun during the time of the flare, and they are classified from R1 to R5, according to severity. This most recent flare caused a moderate R2 blackout.

Solar activity, which astronomers have tracked since 1775, rises and falls according to a roughly 11-year cycle. Solar activity has been especially high recently, with sunspot numbers nearly twice those of NOAA predictions.

And many more flares will likely lash Earth in the coming years. The sun’s activity is projected to steadily climb, reaching an overall maximum in 2025, before decreasing again.

This ramp-up in activity means that, on the night of a solar storm, the northern lights will be visible much farther south than usual. This is because Earth’s magnetic field gets compressed slightly by the waves of highly energetic particles, which ripple down magnetic field lines and agitate molecules in the atmosphere. This then releases energy in the form of light to create colorful shifting curtains in the night sky.

Anita Martir Rivera - August 15, 2019
0
It comes amid anger in Pyongyang at ongoing US-led military exercises with South Korea - which the North views as a rehearsal for invasion.And...

Earth is set for BIG FREEZE as sun goes BLANK for...