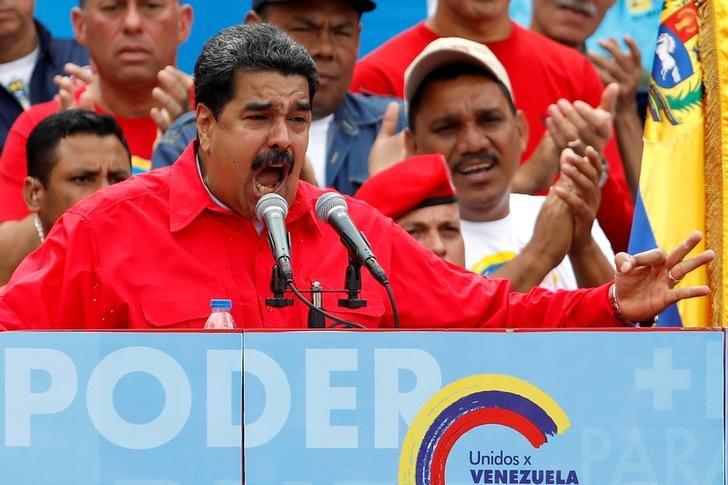 CARACAS, July 29 (Reuters) – Venezuela’s opposition said it is ready to change tactics in its bid to bring down President Nicolas Maduro after Sunday’s election of a legislative super-body that they say is designed to tighten the socialist’s already strong hold on power.

Anti-Maduro protesters blocked streets on Saturday in a last-ditch effort to derail Sunday’s election of a “constituent assembly” designed to rewrite Venezuela’s constitution.

Maduro says the assembly, which will have the power to dissolve state institutions as well as rewrite the constitution, will bring peace to the convulsed country.

The oil-rich but recession-racked country has been gripped by four months of protests against Maduro that have left more than 110 dead in confrontations with security forces who have responded with tear gas, rubber bullets and water cannons.

“Starting on Monday we will have new actions, tactics and strategies to fit the new reality we will be living in,” opposition congressman Freddy Guevara told reporters after urging protesters to man the barricades through Sunday.

“This is a tough, conflictive time that we did not look for, but that will only hasten the fall of this government,” he said.

Caraqueños, as residents of capital city Caracas are known, walked through debris-strewn streets to do last-minute food shopping before stores close on Sunday for the vote.

Those who are against Maduro’s brand of socialism said they would not participate in Sunday’s election.

“I’m not going to vote tomorrow. I’m going to stay home, watch TV series and then come out to join the protests, of course,” Margarita Lopez, a physician’s assistant in Caracas, told Reuters as she stood by one of the barricades.

“It might not do any good, but our voices have to be heard.”

People with enough money to buy food in the face of the world’s highest inflation rate stocked up on basics like bread, chicken and milk in case unrest forces stores shut past Sunday.

“People are desperately buying groceries while they can because who knows if we’ll be able to keep buying on Monday,” Nestor Escalante, a 50-year-old graphic designer, told Reuters outside the Always Fresh grocery store in Caracas.

“I’m using savings to make sure I have food in the house.”

Of the 6,120 candidates in Sunday’s election for a 545-member constituent assembly, none are from Venezuela’s opposition, which is boycotting what it calls a rigged ballot meant to consummate a dictatorship.

Critics say Maduro is less interested in rewriting the constitution, which already provides generous powers to the executive branch, than he is in obtaining the near-absolute powers that the new legislative body would have.

As uncertainty mounts ahead of Sunday, businesses have curtailed operations, U.S. diplomats have sent their families home and several airlines have stopped flying to Venezuela.

Colombia’s main carrier Avianca announced an immediate end to its service to Venezuela on Thursday, a particularly hard blow as the neighboring country is often used as a connection point for travelers flying to and from Venezuela.

Colombia said it will not recognize the result of what it called Venezuela’s “illegitimate” assembly vote.

Delta Air Lines said it will suspend its once per week service between Atlanta and Caracas in mid-September.

In Sweden, cash is almost extinct and people implant microchips in...

Anita Martir Rivera - November 23, 2018
0
Few countries have been moving toward a cashless society as fast as Sweden. But cash is being squeezed out so quickly — with half...

How to survive a killer asteroid

‘Worst is yet to come’ As floodwaters rise, Florence devastates North...

‘Alien’ plutonium crashed to Earth millions of years ago found on...