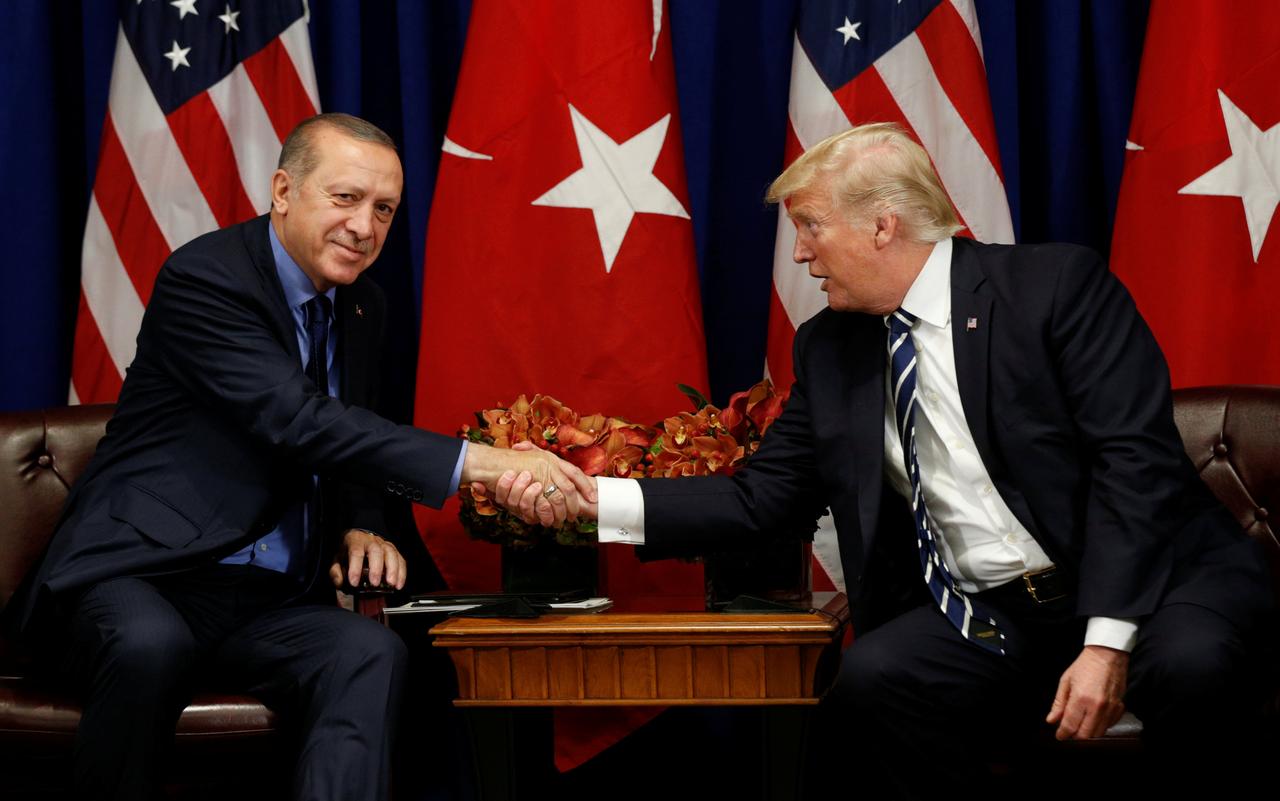 President Obama praised Turkish President Recep Tayyip Erdogan as “a man of action” and one of the five world leaders with whom he had the strongest bond. President Trump met with him at the White House last spring and praises Turkey’s Erdogan as a friend.

And certainly Erdogan has tried to portray himself to Western leaders as a pragmatist with whom they can work.

But at a convention of his ruling party Sunday, Erdogan invoked a Muslim hadith — a collection of the accounts and sayings of Muhammad — that made clear his view of Jews and the state of Israel, according to dissident Turkish journalist Abdullah Bozkurt, the Investigative Project on Terrorism reported.

“Those who think they own Jerusalem better know that tomorrow they won’t be able to hide behind trees,” Erdogan said, according to Bozkurt.

That statement essentially is an affirmation of a prophecy that all Jews will one day be destroyed, the journalist said.

Bozkurt explained Erdogan was making “a veiled threat of killing each and every Jew with a shocking reference to apocalyptic prophecy of tree story.”

The Turkish leader was responding to President Trump’s decision last week to recognize Jerusalem as Israel’s capital and to begin the process of moving the U.S. Embassy from Tel Aviv to Jerusalem.

Bozkurt said anti-Semitism has always been in the background in Turkish society, but this marks the first time Turkey’s head of state has publicly fueled it.

Erdogan invoked the hadith during a Justice and Development Party gathering Sunday in which he also accused Israel of being a terrorist state.

Turkey, under Erdogan, has harbored and funded Hamas terrorists, provided covert support to ISIS and other jihadists in Syria, and bombed civilians belonging to his own Kurdish minority, IPT said.

IPT pointed out that the Turkish Youth Foundation, run by Erdogan’s son, Bilal, participated in anti-Israel and anti-U.S. rallies calling on Muslims to unite against Trump’s Jerusalem announcement.

On Friday, protesters in Istanbul chanted “Jerusalem is ours and will remain so!” along with “Down with America” and “Down with Israel.”

‘An approach typical of the Russians or Chinese’

In May, as WND reported, Erdogan watching his security officials beat protesters outside Turkey’s embassy in Washington. Members of his security team also clashed with demonstrators in 2016 outside the Brookings Institution in Washington, where he was giving a speech.

Brookings issued a statement at the time saying the security team “behaved unacceptably — they roughed up protesters outside the building and tried to drag away ‘undesired’ journalists, an approach typical of the Russians or Chinese.”

WND reported many geopolitical analysts are concerned the NATO nation, once regarded as a potential member of the European Union, is being systematically transformed into an anti-Western power. Fifteen years into his rule, Erdogan is abandoning the secular tradition of the founder of modern Turkey, Mustafa Kemal Atatürk, in favor of Islamic nationalism.

In April, Erdogan declared victory in a referendum to grant him sweeping powers in a vote opponents charged was marred by irregularities.

The measure, with 51.5 percent of the vote, replaced Turkey’s parliamentary system with an all-powerful presidency and abolished the office of prime minister.

A week before his visit to the U.S., Erdogan urged Muslims to swarm the Temple Mount to act as a counter to the “insult” of “occupied Jerusalem.”

He called Israel a “racist and discriminatory” state that is reminiscent of apartheid in South Africa.

In December 2016, as WND reported, hacked emails released by WikiLeaks showed Erdogan’s son-in-law was tied to the company accused of importing oil from ISIS. Russian Deputy Defense Minister Anatoly Antonov previously told journalists in Moscow that Erdogan and his family were “involved” in ISIS’ illegal oil trade and personally benefiting from it.

Turkey also has been accused of training ISIS fighters and of providing direct support to ISIS.

At the White House in May, President Trump and Erdogan described the relationship between the two countries as strong but avoided the differences over strategies for confronting ISIS in northern Syria.

The previous week, the Trump administration decided to supply heavy weapons to Syrian Kurdish rebel militias, the YPG, fighting ISIS. Turkey is in an ongoing battle with Kurdish separatists in its southeast.

The Turkish embassy claims the protesters at the embassy Tuesday were affiliated with the Kurdistan Workers Party (PKK), the leading Kurdish separatist group, which has been banned in Turkey.

The case of Pastor Andrew Brunson, who has been imprisoned in Turkey without formal charges since October 2016, was brought up three times during Trump’s meeting with Erdogan, twice by Trump and once by Vice President Mike Pence, CBN reported.

A former member of Turkey’s Parliament who has advocated for Brunson’s release, Aykan Erdemir, told CBN that Brunson, improbably accused of “membership in an armed terrorist organization,” is now “a pawn, kind of a trump card in Erdogan’s hand.”

“There’s absolutely no rule of law, no due process in that case, it’s a completely bogus case. Anyone who has looked at the case knows that these are trumped up charges,” he said.

Russians ‘will go to heaven’ in event of nuclear war says...

Anita Martir Rivera - October 19, 2018
0
Sochi (Russia) (AFP) - Russians will "go to heaven" as martyrs in the event of nuclear war because Moscow will only ever use nuclear...

Mega-Pastor “smears” God of the Jews