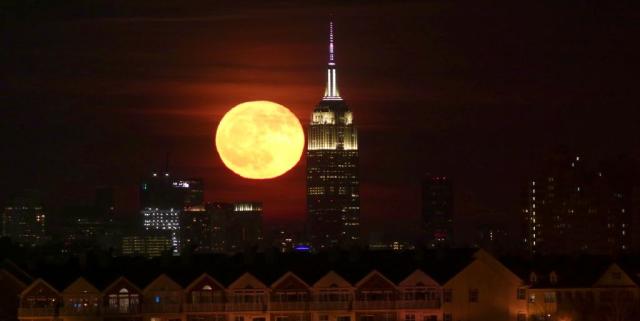 It’s November, so you know what that means: well, Thanksgiving, but also another dazzling full moon to admire. This one is known as the Full Beaver Moon, and it will appear at its peak on Tuesday, November 12th, at 8:34 AM EST. But clear skies on Monday night, the 11th, make viewing conditions just right for a bright orange full moon on the horizon just after sunset (at 4:36 PM EST), one that will then continue on its upward trajectory, turning yellow then white in the stratosphere. If you miss it, don’t fret: You can still catch it at moonset tomorrow morning and after sunset on Tuesday night.

So what’s with the name? Every month’s full moon has a designated moniker that is linked to the seasonal practices of or conditions faced by Native Americans and early settlers, according to the Farmer’s Almanac. The full moon in May is called the Flower Moon, because blossoms start to bloom in earnest, and the full moon in September or October is known as the Harvest Moon, because its bright light helped aid farmers gathering their crops. The Beaver Moon’s nickname arose because it signaled the time to set beaver traps before the animals went into hibernation. So while it’s tempting to assume you’ll spontaneously witness the image of a beaver replace the man in the moon, that’s sadly not the case.

It’s not the only celestial occurrence making headlines this month. The first phase of the year’s best meteor showers, the Taurid, has been blazing since mid-September, with its second phase kicking off two weeks ago and running through December. Though the Full Beaver Moon’s brilliant display might threaten to make viewing these bright fireball-like meteors difficult, the overlap of the two phases boosts your chances for spotting five to ten shooting stars per hour. And you’ll also be able to see Venus, Jupiter, and Saturn above the horizon just after sunset. So grab a sweater and your finest hot cocoa—you may be outside for a while.

Alarm over leprosy like flesh-eating bacteria cases in Australia… coming to...

Navy carries out drills for mega-quake that could wipe out Mediterranean...