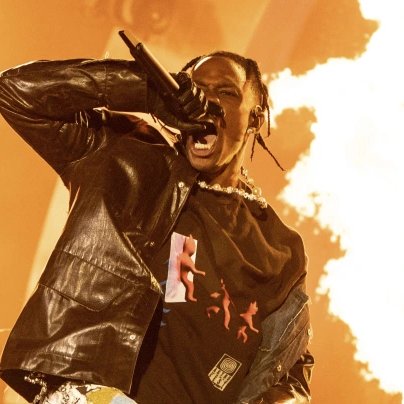 Videos of the Astroworld crowd crush that killed eight people flooded TikTok over the weekend. But conspiracy theories have also flourished alongside the graphic footage, accusing the rapper Travis Scott, who founded and performed at the festival, of orchestrating a massive satanic ritual.

“This ain’t a festival, it’s a sacrifice,” reads one typical comment. “The music industry is demonic and collects souls,” reads another comment with 34,000 likes.

Despite its absurdity, the theory has steadily gained traction – with phrases such as “astroworld demonic”, “astroworld illuminati” and “astroworld upside down cross” trending among other AstroWorld content on the platform.

“We have this stereotype of conspiracy theorists being older people on social media, but young people can in some ways be more susceptible,” said Jennifer Stromer-Galley, a professor studying social media platforms at Syracuse University.

“We know that human brains really like sensational content, and teenage brains even more so because they are still developing,” she added.

Internet users have seized on several far-fetched “symbols” present at the concert, including imagery of flames and burning doves. Some TikTok users described the stage as “an inverted cross leading to hell”.

Joseph Russo, who teaches a class on the anthropology of conspiracy theories at Wesleyan University, said such wild claims bore links to QAnon, a conspiracy theory that claims a secret cabal of pedophiles controls the government and is trafficking children.

“It is mutating and taking different forms, but it goes back to the idea there is a shadowy group of people in control behind it all,” Russo said. “It is super seductive, and always comes back – but it is surprising young people are following this script more and more.”

Gen Z – the name for the generation born after 1996 – faces a number of risk factors for misinformation. It has far higher rates of mistrust in traditional institutions such as the news media and the government compared with past generations and uses social media to get its news coverage at much higher rates than its counterparts.

The algorithms used to increase user engagement on these platforms presents an additional risk, according to Ioana Literat, an associate professor of communication studying social media at Teachers College, Columbia University.

“This is an indication of just how fertile of a ground TikTok is for creating and sharing misinformation and conspiracy theories,” she said, adding that while conspiracy theories were common after tragic events, it was now easier to share them.

“With the reign of social media platforms like TikTok, there’s the potential for greater and further spread, and a certain rise in sophistication in terms of the deployment of media resources to craft these arguments,” she said.

It’s not the first time that TikTok has enabled the spread of misinformation among young users. In 2020, a debunked theory that the online furniture outlet Wayfair was involved in a child sex trafficking ring was shared hundreds of thousands of times.

A spokesman for TikTok said the conspiracy theory content violated its community guidelines and it was taking action against the material.

While many of the theories might seem harmless, they could still present problems offline, said Abbie Richards, a TikTok disinformation researcher.

“We’ve seen that time and time again this can absolutely translate to real-world harm,” she said.

The rise of conspiracy theories, among Gen Z and its elders, appears only to be worsening in the wake of tragedies like the concert in Houston, said Russo.

“In a moment in which young people feel they’re living in a really chaotic world where not much makes sense, certain conspiracy theories can feel like a security blanket, because they tell us there is actually an order underneath it all,” he said.

Obama Is Returning To Politics This Fall, And Trump Isn’t Going...

Anita Martir Rivera - August 13, 2017
0
Julia GlumThe time has finally come: Barack Obama is about to publicly get back into politics. The former president may have spent the beginning of this...

BANK OF AMERICA freezing accounts of customers suspected of not being...